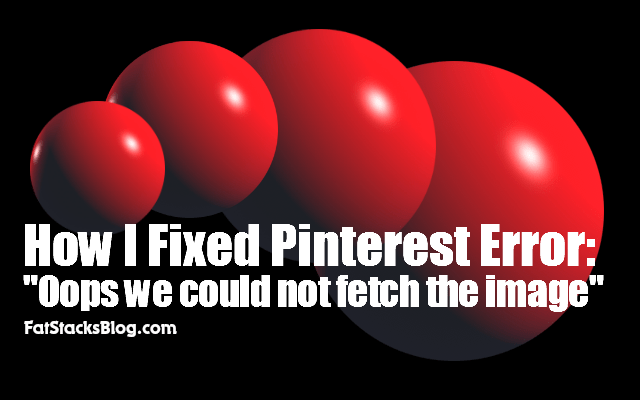 This is a bit off topic for this blog, but I want to post it because it just may help you.

About 3 weeks ago I was on one of my niche blogs checking things out and testing functionality.  I decided to pin an image, but couldn’t.  An error message popped up “Oops Sorry we could not fetch the image.”

This was alarming because that niche site has a lot of images.  I have a large Pinterest following in that niche.  Pinterest is an important piece of the entire project.  In fact, readers were contacting me saying “I can’t pin your images”.  When you start to lose visitors, that’s a big problem.

My solution for fixing this pertains to websites with the following:

Therefore, if your site is not similarly configured, my solution is not likely going to help.  I read every article and blog post on this issue when it arose and there appears to be more than one reasons the issue can arise.  My solution worked for a very specific site set up (i.e. Amazon CloudFront hosted images and SSL certificate installed on my website).

The problem arose for me when I migrated my site’s media to Amazon Cloudfront.  At the very same time I installed an SSL certificate.  Therefore, it was not easy diagnosing the problem… was it the SSL certificate or was it an issue with the images being hosted on Cloudfront.

It turned out it was both.  In fact, the solution involved one click of the mouse.

In a nutshell, all I had to do was change my Amazon CloudFront Distribution settings regarding the SSL certificate.  Initially I had “Custom SSL Certificate” selected.  When I switched it to “Default CloudFront Certificate” the problem was solved.

Here’s a screenshot of the setting that fixed the issue: 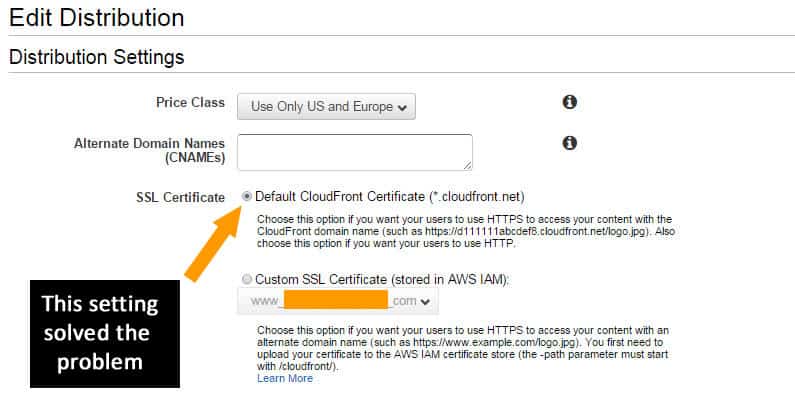 WARNING:  I fixed this issue with the help of Amazon AWS support.  I strongly suggest that you do not go in and make changes to your CloudFront account unless you know what you’re doing or are doing under the guidance of someone who knows what they’re doing.

The first step to fixing the issue:

You need to diagnose what the problem is.  That was my biggest frustration.  Without knowing what’s causing the problem, it’s impossible to know which service can help fix it.

Initially I contacted my web host, Pinterest, my SSL certificate issuer and Amazon AWS support (I paid the $149 per month support fee to get support).  On the first round of support requests, because the cause of the problem wasn’t diagnosed, nobody could help.

In fact everyone except Pinterest said “oh it’s a problem with Pinterest.”  I didn’t think so.  I had a hunch it had to do with the SSL certificate and Amazon CloudFront.

How I diagnosed the problem:

I created a page on the site in issue and uploaded 3 images.

This told me the issue was tied to a setting on Amazon CloudFront and the SSL certificate.

I submitted these findings to the Amazon AWS support rep and he immediately knew how to fix it, which was to change the Distribution Settings as pictured above.

If you have a similar problem, I hope this helps you get it fixed.