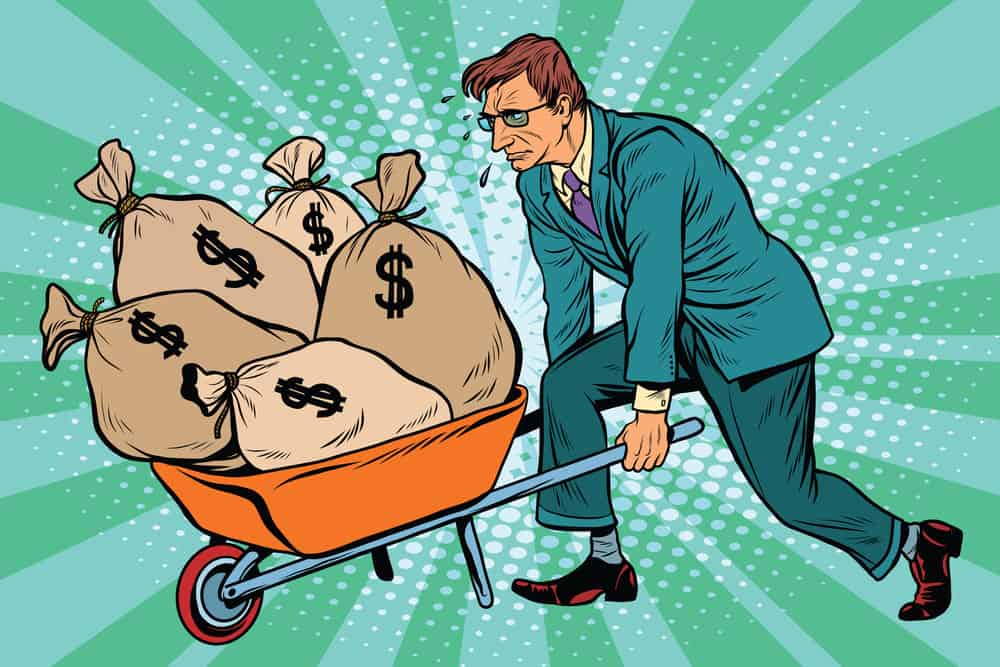 Once upon a time, I practiced law defending criminals (alleged) and helping people navigate the divorce minefield.

I actually liked family law. Lots of lawyers can’t stand it, but I didn’t mind it.

The downside is divorce usually causes another big set of problems, at least in the short term.

These days plenty of folks who want to divorce, don’t do it because they can’t do it.

Here’s the big divorce dilemma: Most people have too much money and at the same time not enough to get divorced.

How can that be?

Many people fall into this dilemma.

They are middle-class folks who own a house, have some retirement savings, earn decent salaries, etc. Usually, they bought as much house as they could which means a big mortgage.

To keep up with the Joneses, many tack on a line of credit and/or 2nd mortgage. After all, the 15-year-old kitchen looked like crap and everyone deserves an annual Hawaiian vacation.

So while their house is worth a lot, there’s not much equity.

Together they can pay the bills and maintain the lifestyle.

Apart, as in divorced, there’s no way both can maintain that lifestyle. In order to keep the house, one party has to buy the other out. Because there’s not much equity in it, neither party on their own qualifies to borrow sufficient money to buy out the house.

Which means selling the house and splitting up whatever cash and assets are left. Often that leaves both parties with not enough money to each buy a similar house in the same area.

That forces both parties to move to another area which results in longer commutes, a new school for kids and/or downsizing. All of which are undesirable.

These days, more and more people faced with this outcome choose to not get divorced, at least for the time being. They stick it out. The consequences are too ugly.

Folks with no money don’t face this dilemma because they have nothing to lose.

Folks with tons of money don’t have this problem because when they split up, divide the assets, they each have enough to maintain the same standard of living. Both can buy a new house in the same area, etc.

The lion’s share of folks fall into the dilemma.

I’ve seen it many times.

Business partnerships fall apart when there’s too much money or not enough.

When the money is pouring in, greed rolls in at the same rate. Disagreements mount. Partners end up hating one another. They dissolve the partnership and the whole thing evaporates. Sometimes the sale proceeds are so much both partners end up rich, but often it’s not enough for both to have financial security.

What was once a good thing is now up in smoke.

On the flip side, many partners realize if they split, the buyout process is so expensive it could be ruinous so they stick it out working together while hating each other.

Why am I rambling on about such grim matters?

Because selling assets, regardless of the reason, can often put you into a worse position than you were before.

Successful sites seem like they’re worth a lot of money (30+X monthly income) but too often it’s not enough.

It’s too much in that you think selling is a great idea because life will be so much sweeter with that lump sum of cash.

For example, suppose you have a website earning $14,285 per month.

You have a sweet gig going, but it requires daily effort to keep it chugging along. You like the work. It beats a 9 to 5, but every morning you wake up you think about the huge amount of money you could get if you sell.

You do the math and to your pleasant surprise, you realize if you get 35X monthly income you could sell it for $500,000.

Wow! That’s like winning the lottery. Seems like life-changing money, and it can be, but for many people, it’s not enough for true financial security.

If you don’t have debt you could travel the world, play video games all day – do whatever you want… for a while.

Without thinking it through, you list your site and sell it inside 2 weeks.

The 500 large hits your bank account a week later.

You’re rich, or so you think.

You naturally blow 10 large on a trip. Another 30 large on a car. Put a down payment on a house.

Things are looking up until your accountant tells you that you owe $150K in taxes.

Fortunately, you didn’t spend it all. You only motored through $200K. You pay the $150K in taxes.

You do the math. That will last only 3 more years, and that’s living cheap.

What seemed like a lottery windfall netted you a mortgage, a trip, a car, some time off, a big tax bill and now a ton of pressure.

It’s time to get to work.

Fortunately, if you know how to build up niche/affiliate sites, you can do pretty well in 3 years.

You can’t help regretting giving up the $14K per month you were earning, which took 4 years to achieve.

You can’t enter the same niche you were in because you signed a non-compete, so you have to choose something new.

This saga could end up really well with a new site earning tens of thousands per month in 3 years or really bad with a worthless site and forced to get a 9 to 5.

You’re swinging for the fences.

You either sink or swim.

What seemed like a great idea turns out to be a potential disaster.

Before you make big moves that severely impact finances permanently, get some professional advice.

This includes selling a website that generates a great monthly income.

Of course, there’s always risk hanging onto a site. It could become worthless in the future.

Every website is one Google algo update from being worthless. I received a $150K offer on a site 2 months before Google Penguin obliterated it. Yeah, I regretted not selling.

Another consideration is future tax implications.

For example, in Canada, capital gains is taxed far lower than income. It’s a mechanism to encourage investing. It works.

But now, in an effort to chip away at the run-away government deficit (nevermind the exploding debt), there are rumblings that the capital gains exemption may disappear.

When I sell a site, the sale proceeds is considered a capital gain.

That means there is a good argument for selling sites now to take advantage of the current capital gain exemption.

In other words, tax changes and implications may also serve as an impetus to sell now instead of hold and grow.

On the flip side, I nearly sold my biggest niche site for $800K several years back. Now that site is worth $2 million and pumps out a ton of revenue monthly.

I can’t tell you what to do, but I can suggest that whatever you do, get professional advice, consider the tax implications and carefully consider the long term consequences.

2 thoughts on “Selling a high-earning website? Think it through and get professional advice FIRST”