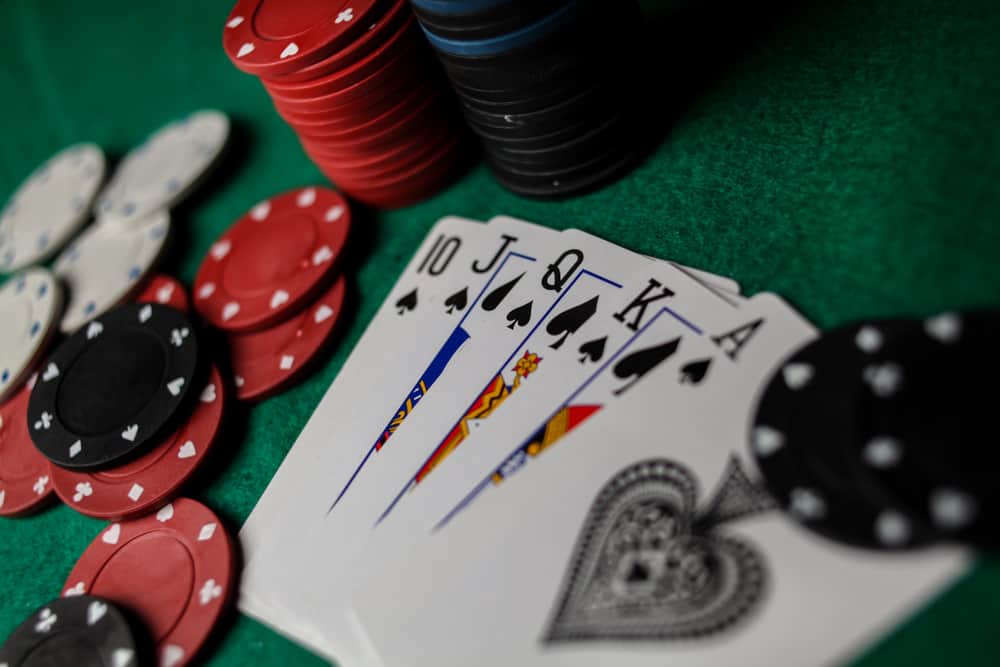 Our most recent poker night was one for the record books.

We had a new guy show up (long time buddy finally made it).

He’s the new guy to join.

But he knows how to play.

About 2 hours in, the flop falls so that it actually sets up a potential royal flush.

The turn is dropped, it’s the fourth card for a R flush.

The river does nothing.

There is only one card out there that can make up the royal flush.

Yes, you guessed. The new guy had it… the queen of spades.

We all marveled how someone actually ended up with a Royal flush.

It’s easier to achieve a R flush in Texas Hold’em than stud, but it’s still an unbelievable hand.

Moreover, he played it smart. Bet big enough to grow the pot but not so big so that everyone folded.

He raked in a huge pot.

Thanks to one card.

His luck didn’t end there. He was the big winner of the night winning several big pots. He also folds often when the cards are worth playing. Knows when to hold ’em and when to fold ’em. He ended up winning enough for a new tennis racquet.

He’s a good player but he had some luck on his side.

Twice he beat me with $30 pots thanks to the river card (last card to be dropped). He stayed in with loser hands and won with the final card. That’s luck as well.

But he also folds a lot. Only plays with strength. He plays a smart game consistently.

So he’s good and he’s lucky.

What’s the saying… “the harder I work, the luckier I get.”

In poker that would be “the smarter I play, the luckier I get.”

There’s truth there. At least I think so.

I‘ve been very, very lucky at times in this business.

I can’t say that the content publishing business I‘ve built is a result of my pure genius. It’s not. It’s more the result of consistent hard work and some luck.

Here are a few instances over the years where I got lucky.

I entered the SEO fray before many local businesses had ever heard the term. I had a local business (law firm) and manage to get a ton of clients in a few short years. I ended up selling it for a good amount of money. That was lucky timing. I was no SEO guru. Just got in at the right time and sold at the right time.

Yes, failure ended up being a very lucky break.

My biggest niche sites launched in 2014. I distinctly remember it. I was excited about it… as an affiliate site. I worked like crazy on it slowly getting traffic to 500 visitors per day. The problem was it earned nothing. Not one dollar. The affiliate links weren’t working.

I was at a loss. Dejected actually. I had spent many months building up a site only for it to be a dismal failure.

One night, and I remember this night as if it were yesterday, I threw up my hands and said “screw it” and slapped AdSense ads on it. I figured something was better than nothing.

The next morning I checked AdSense and almost fell off my chair. There was something like $176 CAD earned the previous day just in the evening. I was excited but baffled.

It turned out a post had picked up a little steam on Facebook, drove a nice chunk of traffic and the ads earned spectacularly well.

I was in business. That site has earned millions since all because it was a failed affiliate site. That’s kinda lucky in my book.

My next lucky break came with Facebook. Organic reach was nuts. Facebook ads dirt cheap. Combine the two and the resulting traffic was incredible. I wasn’t the only person who benefited from this… tons of publishers did. It was a wild few years until FB turned the organic reach spigot off and FB ads became expensive.

Another lucky break came when I somehow published a series of articles on a little known topic within my niche that exploded in traffic and revenue. That was just pure luck choosing a particular angle that nobody else did. Moreover, I didn’t do KW research back then. I just picked it out of thin air thinking it was a good topic and series. No skill. Just luck… athough the content is very good. It ranks to this day.

I would have enjoyed none of those lucky breaks had I not been in this business in the first place.

I believe if you ask anyone with a reasonably successful business, they’ll admit they had some lucky breaks along the way. It’s par for the course. You can’t plan for it but it happens if you stay the course.

You just hope the lucky breaks benefit you more than the unlucky ones hurt you.

It hasn’t been all roses and sunshine.

While I‘ve enjoyed lucky breaks, I‘ve had some bad luck too.

I‘ve had sites hammered in Google search going from 5 figures per month to peanuts overnight.

I‘ve had bad malware attacks – one so bad Google actually deindexed the site for four to six weeks. That hurt.

The Facebook traffic tsunami ended almsot instantly which sucked. I anticipated it would end so I was prepared but you’re never really prepared for less traffic, are you?

I‘ve had significant traffic drops over the years from various Google search updates. Eventually, most sites take a hit from some update. I‘m talking 20%+ drops. They suck. But I‘ve stayed the course and in time traffic rebounds.

FYI, generally traffic drops from Google algo updates don’t mean your site is penalized. It’s merely a Google search results shuffle. There is no reason to bail on a site from these unless it is a penalty (you get some notification in Search Console) or you got hammered by the draconian Medic update (which I still think went way too far and I‘m not in the health or personal finance niche).

What was my luckiest break?

I believe it was discovering how well display ads could earn. This changed everything for me. I no longer had to focus on affiliate content. I could publish on topics about anything I wanted within a niche. I could go for easy keywords which meant easy traffic. I‘ve since built an entire business from this lucky break.

What’s been your luckiest break?