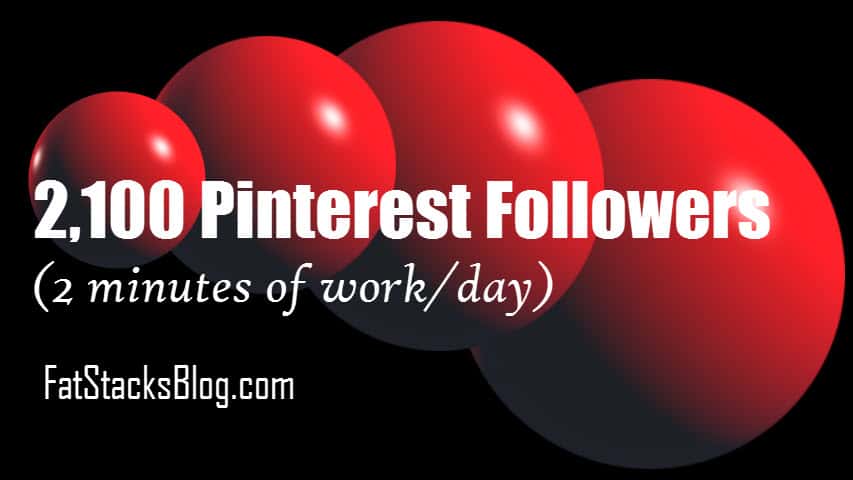 The title only tells half of the story.  In fact, the less important half.

The real issue is how much traffic does 2,100 followers generate?

Over the last 30 days, my biggest niche site generated 4,392 visitors from Pinterest (only .75% of total traffic):

You know what?  I think that’s lousy.  Frankly, Pinterest has been a poorly performing social media channel for me despite growing to over 2,100 followers and getting a truckload of pins from my website every day.

When did I start my Pinterest boards in this niche?

In February 2014 (the same time I launched my niche site).

Moreover, I’m not much of a “Pinterest Community Player.”  I don’t repin.  I just upload and pin my own images… every image linking to my site.

So, I can’t really blame Pinterest too much because for the effort I put in, the results aren’t terrible.

BUT, the fact remains my Pinterest boards attract followers on autopilot and send traffic to my site from Pinterest slowly increases each month.  It’s a long term investment.

While you could certainly read articles about Pinterest with much more impressive numbers, I think I can share one thing that’s important.  And that’s how to get followers with VERY little effort.

I don’t necessarily recommend being a lazy Pinterest Board publisher; however, time is limited so you must pick and choose what you focus on.

If you want to learn how to build up a Pinterest following and get traffic with little work, read on.

How did I get 2,100 Pinterest followers generating 4,200 visits per month to my blog in under 11 months?

Step 1:  Ensure you have Pinterest sharing buttons on your site

I strongly recommend you use the SumoMe plugin and activate the image sharer feature.  This places a Pinterest button that hovers over your images (along with a Facebook share and Twitter button).  I also use Shareaholic for the floating side social sharing buttons and for social sharing buttons below my content.

Most of the pins from my site come from the SumoMe plugin.

IMPORTANT:  I get far more Pinterest activity from website visitors pinning my images from my site than activity via Pinterest followers.  Check out the following pin activity (it’s the SumoMe image sharer plugin results):

Step 2:  Plan out your boards (and how to choose Pinterest board titles)

After about 3 months, I decided to rename my Pinterest boards.  My titles were too long.  I changed them to 2 or 3 word titles that encapsulated what the boards were about.  While it’s never great having to change your board names, I don’t regret doing it in the long run.

The problem with changing board titles is it changes the board’s URL.  Therefore, if you have a lot of traffic going to your boards, changing the URL can impact that traffic.

That said, if you really dislike your board names, bite the bullet sooner rather than later (like I did).  I don’t regret it and it’s been worth doing in the long run.

The following is a screenshot of what I’m talking about.  As you can see with the screenshot below, there isn’t very much space on the thumbnail board images.

FYI, I don’t share my niche information because I don’t need the competition.  If you’ve read much of my blog, you know that’s been my editorial decision.

Step 3:  Pin/upload your own images

This is a given.  If you upload images, be sure to edit the pin after it’s published to insert your website’s URL in the source field.  I input the specific post on which the image is found on my site.

My team adds about 70 images per week to my boards.  It’s a pretty hefty volume.

Step 4:  Join relevant group boards with thousands of followers in your niche

I cheated here.  I paid for access to large group boards.  It was $10 or something like that to join 6 popular boards with tens of thousands of followers.  I tried contacting group boards and never heard from them.  Money makes things easier.  I just offered money to join and was accepted immediately.

Step 5:  Be consistent – growth is exponential

In other words, don’t expect 1,000 followers in 2 months.  It takes time.  Be like the tortoise… just keep pinning.

That said, if you’re willing to invest more time than me, you can probably hit 2,000 followers much faster than I did.

What could I do to improve my Pinterest traffic and get more followers?

I could do so much more, but I only have so much time.  I’ve dabbled with some of the following methods, so I know they work.  I just don’t do them regularly.

1.  Add some custom text with a call-to-action to more of the images I pin.  I’ve noticed, for example, if I put the title of the blog post with “Click Here” text, I drive more traffic to my site.  I wouldn’t do this with every pin because they are kind of annoying.  I upload a few of these types each week.

2.  Repin.  As I stated above, I don’t repin. I did in the beginning, but it’s boring.  I know it’s not in the spirit of Pinterest, but I don’t bother.  I could outsource it and maybe I’ll add it to my team’s tasks… but honestly I’m more interested in investing in publishing more content.

I’ve read that many Pinterest users repin 8 pins for every 1 or 2 of their own pins.  If I followed that ratio, I’d repin 40 to 80 pins per day, which would very likely improve my Pinterest metrics.

A swap would work as follows.  I agree to post to my Facebook page wall for another site.  That other site’s publisher pins one or a few of my images to their board(s).  It’s pretty simple.  This would probably be the best investment of my time and money to gain a larger Pinterest following.

FYI, social media swaps can work with any and all social media channels.  I could certainly improve my Twitter follower count trading Facebook posts for retweets.

If you have one strong social media account with which you can drive decent traffic, it’s not a bad idea to leverage that by doing swaps to build up other social media channels or further build your dominant channel.

I’m not suggesting you go out and follow 5,000 boards in a week.  However, I could certainly increase the number of followers if I followed more boards.

That said, I think you look more authoritative on Pinterest if you have more followers than boards you’re following.  It’s a fine line.

Why don’t I invest more time and money on Pinterest?

I have enough Pinterest traffic to know that the amount of revenue 1,000 visitors from Pinterest is much less than from other sources of traffic (Facebook, organic search and Bing Ads to name a few).

This means given limited time and money, I choose to invest more into Facebook and organic search traffic because on a per visitor basis, it’s more lucrative.

Why bother using Pinterest at all (if RPM is relatively low)?

If Pinterest traffic doesn’t generate that much revenue on an RPM basis, why do I bother using Pinterest at all?

At about 2 minutes per day, 7 days per week, my total time invested (I pay for this) is 60 minutes per month.  My outsourcing team costs $26 per hour.

Yet, my Pinterest traffic generates $120 to $130 per month in revenue.  Therefore, the ROI is excellent.

The issue of course is (and I haven’t tested this yet), is whether I would enjoy a similar ROI if I tripled my investment in Pinterest by repinning, adding even more photos, following more boards, etc.  It may be worth it… but I have a hunch it won’t be.

The reason I don’t think it will be worth it is the fact I get literally thousands of pins from my website every week… yet the traffic generated from this volume is fairly low.  Therefore, investing an additional 2 to 3 hours per month probably won’t result in all that much more traffic.

There are boards with tens of thousands of followers.  I’ll get there.  If I can generate a decent ROI with 2,100 followers, my ROI will only improve over time.

Just because Pinterest isn’t the most lucrative source of traffic for me doesn’t mean it won’t perform well for you.

If you’re in a niche that works well with Pinterest, I recommend setting up boards and giving it a shot.  Work at it until you get a few thousands visitors to your site and see how lucrative it is for you.

Learn the basics and just get started

I used to be intimidated by social media.  I had no idea how it worked.  I read a lot about it, but I believe my decent success with Facebook and Pinterest boils down to just doing it.

I read regularly what other bloggers and site publishers are doing… but I spend more time doing than reading.

I made big mistakes along the way, but it’s still worked out.  As I said above, I had to rename all my Pinterest boards, which is not insignificant.

If you’re in a niche that is even moderately popular on Pinterest, get started ASAP.  It’s worth it.

2 thoughts on “How I Got 2,100 Pinterest Followers with 2 Minutes of Work/Day”